John Wesley and his brother Charles were born in Epworth, Lincolnshire into the large family of Samuel and Susanna Wesley. Both parents were devout and strong-minded people. At the age of six John was rescued from a house fire and this gave rise to a belief in his family that he had been spared for some special purpose. 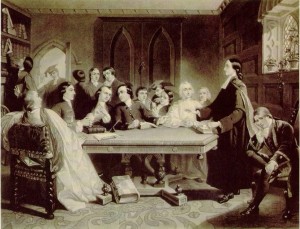 While Charles Wesley was a student at Oxford, he became more serious about his faith and started a small group nicknamed ‘the Holy Club‘, which met for prayer and Bible Study. Later, John became a leading light in the group and in particular stressed the need for combining a deep inward faith with practical service to those in need. They sought to challenge the religious assumptions of the day. The scholars used to go into town and the local prison to do charitable work and visit the sick. Other students had a variety of mocking nicknames for the group, but the one that stuck was ‘Methodists‘ because of the methodical way in which they carried out their Christian faith. 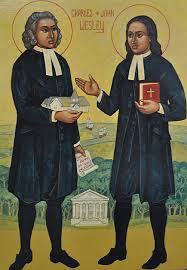 John and Charles Wesley set out for America in 1735, enthused at the idea of preaching the gospel to Native American people. During the voyage the ship was struck by a terrifying storm. John was afraid but while the English passengers screamed in terror, a group of German Moravians continued to conduct their service by singing seemingly untroubled. John realised that they had something he didn’t, an absolute trust in God. They were prepared to lose their lives because they knew that God was never going to let them go.

Both John and Charles Wesley returned to England dissatisfied with their spiritual state. They joined in a ‘Religious Society‘ and in May 1738 both underwent a profound spiritual experience. In his Journal for 24th May 1738 John wrote: “I felt my heart strangely warmed. I felt I did trust in Christ, Christ alone for salvation, and an assurance was given me that he had taken away my sins, even mine and saved me from the law of sin and death.” The experience transformed Wesley and inspired him to become one of the greatest preachers of all time.

From his days of ‘the Holy Club‘ John Wesley knew George Whitefield who had overgone a similar conversion a few years earlier and had gone on to preach in large open-air meetings. As an Oxford don and an ordained Church of England minister, Wesley had a reverence for the ‘proper‘ places of worship and was initially uneasy about preaching in the open-air. However, as many working class people often felt excluded from the churches, ‘field preaching‘ became a key feature of the Methodist Revival. Wesley went on to spend his life travelling the country, preaching to crowds on village greens, at pitheads, wherever he could find people to listen. His sermons appealed to people’s hearts and minds, and were experienced as deeply personal messages by those who listened. They reached many who felt alienated from the Church because of their emphasis on God’s freely-given forgiveness and love for all.

For the Wesleys, ‘works‘ as well as faith were essential to the whole Christian living, and caring for the poor, prisoners, widows and orphans mattered a great deal. Methodists were encouraged to work their utmost to improve the lives of others. John Wesley exhorted them to: “Make all you can, save all you can, give all you can.“ 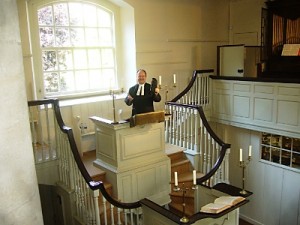 Although Wesley declared: “I live and die a member of the Church of England“, the strength and impact of the movement made a separate body virtually inevitable. In 1784 Wesley gave legal status to his Conference, which moved towards the legal separation of Methodism from the Anglican Church. Disputes about the status of the travelling preachers and the administration of the sacraments were resolved by the Plan of Pacification (1795) which was a decisive break with the Church of England.

The Primitive Methodists were a major offshoot of the principal stream of Methodism, the Wesleyan Methodists. In the early part of the 19th century there was a growing body of opinion among the Wesleyans that their Connexion was moving in directions which were a distortion, if not a betrayal, of what John Wesley had founded. Eventually a Methodist preacher called Hugh Bourne became the catalyst for a breakaway and formed the Primitive Methodists. The term ‘primitive‘ was used to clarify their self-understanding that they were the true guardians of the original, or primitive, form of Methodism. By the end of the 19th century these two streams of Methodism realised that they more in common than they might have supposed. So conversations began which led to them being the two principal partners in the union to form the present-day Methodist Church in 1932. 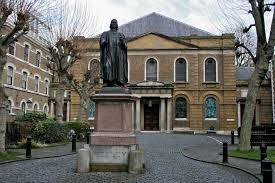 In the 19th century Methodism identified itself with the ‘total abstinence‘ temperance movement. This was at a time when social evils such as poverty and domestic violence were greatly exacerbated by drunkenness. Strong drink was cheap and many suffered. Encouraging and helping people to abstain improved many lives. Methodism has retained a reputation for temperance, but today alcohol consumption for Methodists is a matter of personal choice. However, the Church is still concerned to help those who might put themselves in danger.

Further information on the History of Methodism can be found on the website of The Methodist Church from where these extracts  were taken.